What Are YOUR STANDARDS? 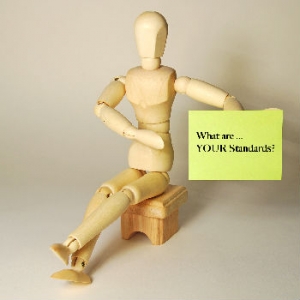 Great coaches and teams of people put their very best into what they do.  Standards, performance norms or accepted levels of behaviors emerge out of their fight for greatness.  The emerging standards, produced from great thought and toil, define the limits of minimal and great performance.  For sales teams, these standards include:

•  Appointments and quotes by person and period
•  Closed sales per every ten (10) quotes
•  Sales results by a sales person, team, or area
•  Income levels per salesperson

Do not confuse standards with goals.  Standards are accepted and measurable levels of belief about what’s right.  For example, think about your favorite college football team – one that has a great tradition.  At a certain number of wins each season, the fans feel either terrible, OK, or great.  And, somewhere between terrible and great, they fire a coach.  That’s because they believe their team ought to win ‘x’ amount of games every season, win the conference once every so many years, and occasionally compete for a national championship.  It’s just apart of the standards in their tradition.